I know Lamingtons have been absolutely EVERYWHERE in the blogosphere, but I couldn’t help jumping on the baking bandwagon (*toot toot beep beep*). I had never ever seen or heard of these coconut covered delights until about a month ago… and so I just had to make them. They are so simple to make but so wonderfully effectiv visually for a party… not to mention DELICIOUS!

On Saturday my friends came round for a good old english style tea and cakes session! I made double chocolate lamingtons with berry jam and they went down a treat. My friend Irma said they were “juicy”.

Now, while it is a very easy process – there are many steps to it and so it can take a bit of a while! I have provided a wealth of images to help you understand each step! You can also make vanilla lamingtons by using a vanilla sponge recipe – but I always recommend adding a dollop of plain yoghurt and a quarter tbsp of bicarbonate of soda in addition to a normal vanilla sponge recipe – it makes it more moist and fluffy! 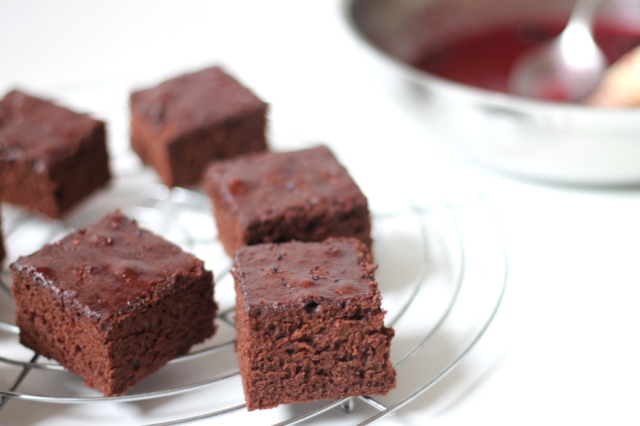 Mmmmmm – this photo really demonstrates how wonderfully moist and flavoursome lamingtons can be with a bit of jam sandwiched in the middle. MMMmmm MMMMmmm MMMMMMmmmmm! This is my plate after approximately 1 second of the lamingtons being ready. 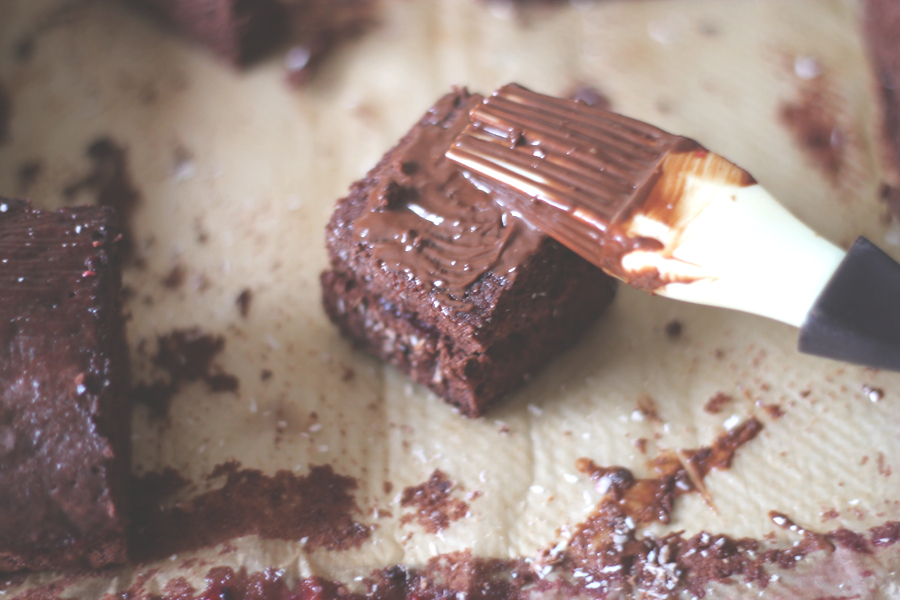 1. Preheat the oven to 180°C and line a rectangular cake tin with baking paper and grease this lightly with butter

2. Melt the chocolate and butter together in a pyrex bowl over a pot of boiling water – until thoroughly melted and mixed

3. In a separate bowl, whisk the eggs and sugar together with an electric mixer until pale and fluffy

4. In another separate bowl, sieve in and mix the flour, the cocoa and the baking powder and bicarbonate of soda

5. Fold the flour and egg mixture in together until thoroughly mixed and now fold in the chocolate and butter mixture.

6. Finally, add the yoghurt to this and mix in thoroughly.

7. Spoon the mixture into the prepared tray and bake for about 25 minutes or until the sponge springs back when pressed.

8. Remove from the oven and allow to cool.

9. Once slightly cooled prick small holes into the surface of the cake with a skewer or sharp knife and brush a quarter of the jam over the surface. This will allow the jam to run through the cake slightly and make sure it is nice and moist!

10. Now cut the cake into squares (see images above)

11. Cut the squares into half sideways – see images (it is best to do this one at a time… otherwise you will lose the matching top and bottom!) and spread a small amount of jam in the middle and then put back together like a sandwich, pressing down slightly, so that they are firmly together.

12. Brush the glaze onto the outside edges of the lamingtons (i left the bottom unglazed so that it was easier to handle and less messy)  and roll gently in the coconut flakes until fully covered.

13. Leave to dry slightly – around 4 minutes and serve

1. In a pot mix together the jam and water and warm up, while mixing.

1. Melt the chocolate in a pyrex bowl over a pot of boiling water on the stove and brush onto lamingtons with a pastry brush.

There is a really cool lamington video over at Gourmet traveller – which is more complex than my way, but an interesting watch all the same